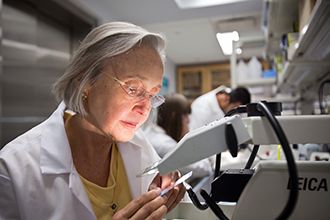 The escalation in recreational use of marijuana and other addictive substances by today’s teenagers is a major health concern, because of the increased risk for psychiatric disorders in individuals who abuse these drugs during adolescence.  The psychiatric symptoms include abnormalities in cognitive functions that are mediated largely through the prefrontal cortex (PFC) and associated limbic brain regions where many cells express cannabinoid-1 receptors (CB1Rs) that are activated by endocannabinoids and by Δ9-tetrahydro- cannabinol (Δ9-THC), the major psychoactive compound in marijuana. Chronic activation of these receptors by Δ9-THC downregulates the endocannabinoid system that is a key regulator of experience-dependent learning in the still immature PFC of adolescence.  The mission of my laboratory is to establish age-dependent changes in the cellular and subcellular distribution of functional proteins that include neurotransmitter synthesizing and degrading enzymes, transporters, and receptors as well as activity-related cytoskeletal proteins. This is being achieved using a multidisciplinary approach including confocal light microscopic and electron microscopic immunolabeling in rodents that are behaviorally tested for cognitive and emotional performance in adulthood.  We are now using these methods to test the hypothesis that region-specific trafficking of neurotransmitter (mainly glutamate and dopamine) and chemokine receptors is correlated with changes in cell firing and ongoing behavior.  The brain regions under investigation include the, prefrontal cortex and striatum as well as the dopamine-enriched ventral midbrain neurons. This approach has already begun to broaden our understanding and improve treatment strategies for many neurological and psychiatric disorders whose symptoms are worsened by adaptive changes in the brain circuitry resulting from adolescent drug use.