Inspired by its namesake’s passion for teaching, the Vincent du Vigneaud Memorial Research Symposium provides Weill Cornell students an important opportunity to share their research and learn from one another. Occurring during the spring of each year, elected student volunteers plan and run their own day-long event devoted to the research of their peers. Starting off with a morning keynote address by a student-elected guest speaker, the symposium features poster and oral presentations by students from all graduate school programs. 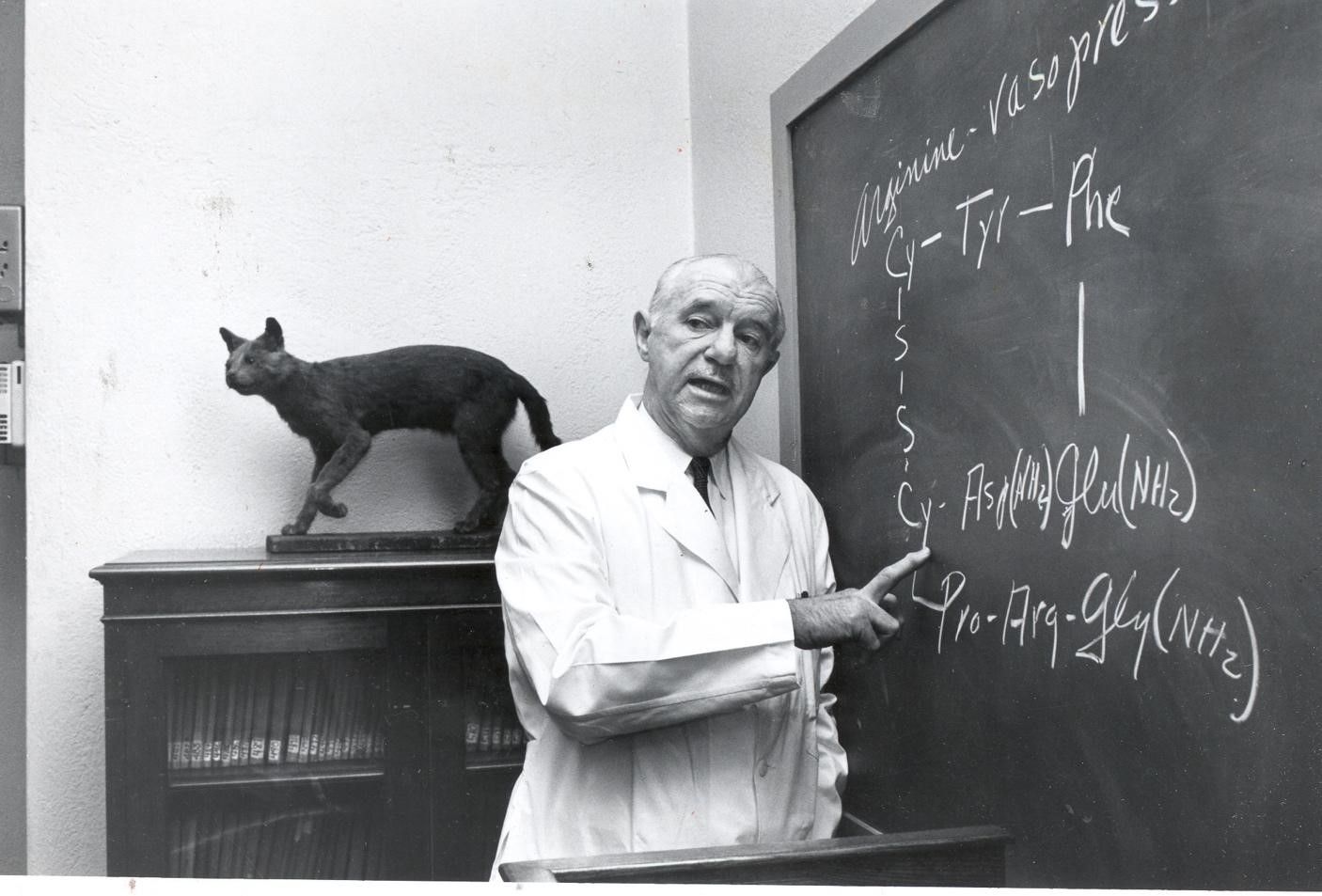 Vincent du Vigneaud was born in Chicago, Illinois on May 18, 1901. He died on Dec. 11, 1978. During his 77 years, he achieved much in the field of biochemistry and received many honors, including the Nobel Prize in Chemistry.

Vincent du Vigneaud received his Bachelor of Science degree in 1923 and his Master of Science degree in 1924, studying organic chemistry at the University of Illinois. In 1927, the University of Rochester conferred the Doctorate of Philosophy degree upon him for his thesis on the chemistry of insulin. In 1932, at the age of 31, he became the head of the Department of Biochemistry at the George Washington University School of Medicine. Dr. du Vigneaud accepted an invitation to come to Cornell University Medical College where, in 1938, he became professor and head of the Department of Biochemistry. In 1967, under college rules governing retirement, du Vigneaud gave up his position at CUMC and moved to Ithaca. As a member of Cornell’s Department of Chemistry he kept his laboratory busy doing research on the chemistry of protein structure. In 1974, Vincent du Vigneaud suffered a severe stroke and in June of 1975 his laboratory was closed. At that time, the research notebooks, correspondence, papers, and files of Vincent du Vigneaud were donated to the medical archives of CUMC.

Vincent du Vigneaud’s research was mainly concerned with sulfur-containing compounds of biochemical importance. The interest started with his investigation of the chemistry of insulin, in which he proved that the sulfur contained in insulin was due to the amino acid cysteine present in the insulin molecule. Du Vigneaud continued his studies on the chemistry and biochemistry of the sulfur-containing amino acids cysteine, homocysteine, and methionine. Based on growth studies in young animals and on other metabolic experiments, Vincent du Vigneaud proposed and firmly established the biological processes of transmethylation and transsulfuration. Du Vigneaud and his associates collaborated with Paul Gyory, and in 1940, they identified Vitamin H as biotin and in October 1942, they established the chemical structure of this vitamin.

During World War II, du Vigneaud and his coworkers took time from their study on sulfur metabolism to attempt to synthesize penicillin. In November of 1946 they announced their achievement, the isolation in crystalline form of the active synthetic G-penicillin, and du Vigneaud returned to his primary field of interest. The investigation at his laboratory at CUMU involved cysteine-containing polypeptide hormones of the pituitary gland. Oxytocin, the uterine contracting and lactation-inducing hormone, was isolated in 1949, as was vasopressin, the antidiuretic hormone, a few years later. In October of 1953, du Vigneaud announced the synthesis of oxytocin. It was for this achievement, which necessitated the development of many new research techniques and opened a new area in protein organic chemistry, that Vincent du Vigneaud received the Nobel Prize in Chemistry in 1955.

Du Vigneaud received many other honors throughout his lifetime including the Nichols Medal from the American Chemical Society (1945) and the Lasker Award (1948). He was a visiting lecturer throughout the United States and Europe. His book, A Trail of Research, was the result of the Messenger Lectures delivered at Cornell University in 1950. As might be expected, Vincent du Vigneaud was an active member of many professional societies including the National Academy of Sciences and an honorary member of others.

During the years after receiving the Nobel Prize, du Vigneaud and his associates continued research on the structure and biological activity of the posterior pituitary hormones. He collaborated with the Department of Obstetrics and Gynecology of the NYH-CUMC on the clinical application of synthetic oxytocin and vasopressin. During all of du Vigneaud’s years in biochemistry inquiry, it is to be remembered that he was also a teacher, trained physicians, and therefore was acutely aware of the need for high level collaborations between the clinical investigator and the research scientist. He is fondly remembered as a compassionate though demanding leader who was truly concerned for his ‘children’ and made sure his associates received their due credits.