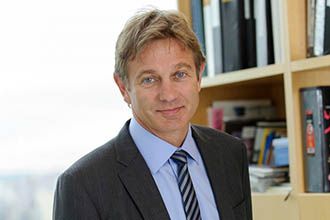 I am a medical oncologist and physician-scientist who specializes in bone marrow transplants as a therapy for blood cancers such as leukemia. With this treatment, also called a hematopoietic stem cell transplant, chemotherapy and radiation are used to kill the cancer in the patient’s blood and bone marrow. Then, new marrow or blood stem cells are given to help healthy blood cells grow back. In the clinic, I take care of patients undergoing these transplants. In the laboratory, I study questions related to this treatment approach and to immunotherapy for cancer in general.

My research is currently focused on two areas:
1) Studying the role that microorganisms living in the intestine (microbiota) play in patients undergoing bone marrow transplants or those receiving cancer immunotherapy.
2) Developing strategies to help the body rebuild the immune system after bone marrow transplantation.
The focus of this work is in enhancing the activity of the thymus, a small organ in the chest that makes certain types of immune cells. This research is being translated into clinical trials that are currently ongoing at MSK.

From 2004 to 2008, I served as Chief Attending of the Adult Bone Marrow Transplant Service. I have been Head of the Division of Hematologic Oncology at MSK since 2008. I’m also a professor of Medicine and Immunology at Weill Cornell Medical College and hold a joint appointment in the Immunology and Transplantation Program of the Sloan Kettering Institute. I am Co-Director of the Parker Institute for Cancer Immunotherapy at MSKCC and Chairman of the Board of DKMS, an international nonprofit organization devoted to bone marrow donor registration.

In 2010, I started the Susan and Peter Solomon Divisional Genomics Program, which focuses on targeted therapy approaches for patients with blood cancers. This program was instrumental in the development of the first genomic profiling test for hematological malignancies called FoundationOne™ Heme.