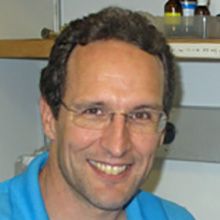 Malaria remains one of the most important infectious diseases in the world today, infecting 300-500 million people yearly and resulting in up toa million deaths, primarily of young African children. The most severe form of this disease is caused by infection with the mosquito borne protozoan parasite Plasmodium falciparum. This parasite lives by invading and multiplying within the red blood cells of its host, causing disease through anemia resulting from red cell destruction, and also through modifications that are made to the surface of infected red cells. These modifications make infected cells cytoadherent or "sticky", allowing them to adhere to the walls of blood vessels, leading to obstruction of blood flow and such clinical manifestations as the often fatal syndrome of cerebral malaria. In addition, parasites are capable of undergoing antigenic variation, a process of continually changing the identity of proteins on the surface of infected cells, thus changing their antigenic appearance and avoiding the immune response. In this way the parasite "hides" from the immune system, promoting a long term, persistent infection that is difficult to clear.

Both the cytoadherence of infected cells and the process of antigenic variation are controlled by a family of genes called var. Each parasite possesses up to 60 different vargenes within its genome, maintaining most of the genes in a silent state, while expressing only a single gene at a time. Each var gene encodes a protein that is placed on the surface of the infected cell, making the cells cytoadherent. When the infected person mounts an immune response against the protein encoded by the expressed var gene, the parasite switches to expressing a different copy. This changes the immunological appearance of the infected cells and allows the parasites to avoid destruction and maintain the infection. The focus of the research project being conducted here at Weill Medical College is trying to understand how the parasite regulates expression of the var gene family. The ability to express only a single gene at a time, and to switch between different genes to avoid destruction by the immune system is key to the parasite's ability to maintain an infection and cause disease. It is hoped that gaining a better understanding of this process will lead to more affective treatments and disease interventions for the millions of people at risk in the developing world.

In addition to studying the transcriptional regulation of the var gene family, our laboratory also studies how parasites generate diversity within these antigen encoding genes. Parasites isolated from different geographic regions typically have completely different var gene repertoires, thus preventing their human hosts from generating an immune response that can recognize all parasites. Thus var genes appear to be diversifying much more rapidly than the rest of the genome. This process of diversification involves frequent gene conversion events that are initiated by DNA double strand breaks. We have initiated studies into how malaria parasites repair DNA double strand breaks and how the special chromatin structure found at var loci influences this process.