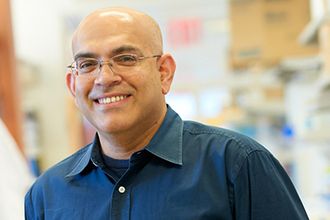 To mount an optimum immune response against pathogens, mature B cells undergo two genetic alterations in the form of somatic hypermutation (SHM) and class switch recombination (CSR). The B cell specific enzyme activation induced cytidine deaminase (AID) is absolutely required for both processes. Since its discovery, the biochemical activity of AID in CSR and SHM has been intensely debated. It is now well established that AID initiates these reactions by deaminating single-strand (ss) DNA in the variable (V) and switch (S) regions of the immunoglobulin (Ig) loci. Components of several DNA repair pathways, including base excision repair, mismatch repair and non-homologous end joining, subsequently process and complete the AID-initiated reaction to effect CSR and SHM. Mutations in AID lead to Hyper-IgM immunodeficiency syndromes and deregulated AID activity has been implicated as a major underlying cause in the pathogenesis of a large number of mature B cell lymphomas in humans. A mechanistic understanding of AID activity in CSR and SHM is thus of utmost importance. Recently, in vitro biochemical studies have provided evidence that the activity of AID relies on a phosphorylation event that allows it to interact with the ssDNA binding protein, Replication Protein A (RPA), and promote deamination of DNA targets. Despite these advances, several aspects of AID function remain unresolved, the foremost amongst which are i) the modes of regulation of AID activity, ii) the role of RPA and other DNA repair proteins in CSR and SHM and iii) the mechanism by which AID is specifically targeted to the Ig locus. These unanswered questions are the major focus of research in our laboratory.