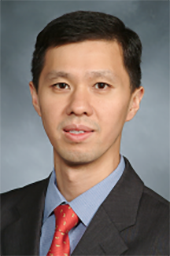 The rising prevalence of obesity worldwide and its associated metabolic derangements, such as type 2 diabetes mellitus (T2DM) and cardiovascular disease, pose an enormous public health challenge. Dr. James Lo is a physician-scientist, specializing in cardiovascular medicine and directing a basic research lab. The primary focus of the lab is to investigate the molecular mechanisms of cardiometabolic diseases with the ultimate goal of developing novel treatments directed against them.

Diabetes is a chronic and progressive disease characterized by insulin resistance and insulinopenia resulting from beta cell failure and decreases in b cell mass. Despite initial success in glycemic control with oral medications, patients with T2DM typically exhibit worsening glucose homeostasis over the span of a few years. The natural history of T2DM includes a continuous decline in beta cell function as illustrated by longitudinal follow up studies of patients. This deterioration leads to the need for additional therapies as well as the cumulative development of diabetic and cardiovascular complications over the lifetime of the individual.

There is a well-known association between obesity, adipose inflammation and malfunction of beta cells but the molecular link remains to be established. Hypothesized mechanisms include amyloidosis, glucolipotoxicity, failure of beta cell expansion, apopotosis and b cell dedifferentiation. Obesity by definition is an expansion of fat mass. However, it is not just the excess of adipose tissue that drives metabolic diseases such as T2DM. It is now recognized that adipose tissue is not simply an efficient storage organ for lipids but also functions as an important endocrine organ, secreting numerous hormones and as an energy burning source via specialized brown/beige fat cells. In diabetes and obesity, there is dysregulation of adipose secreted factors, termed “adipokines”. There is loss of protective adipokines such as adipsin and adiponectin coupled with production of pro-inflammatory and pro-insulin resistant adipokines such as TNF and RBP4.

Recently, our work has led to the identification of adipsin as a critical molecular link connecting obesity and adipose tissue homeostasis to pancreatic beta cell function in type II diabetes. Adipsin, also known as complement factor D, is an adipokine secreted by adipocytes and is decreased in models of obesity and diabetes. We showed that C3a, a complement peptide downstream of adipsin is a novel insulin secretagogue, augmenting pancreatic beta cell function. Our study demonstrates that the adipsin/C3a pathway is critical for islet function under metabolic stress and suggests that manipulation of this pathway may represent a novel therapy for cardiometabolic diseases.

The Lo Laboratory is now investigating the determinants of metabolic health using state-of-the-art molecular approaches. There are a number of different active projects available including some centered on adipose tissue function, pancreatic islet biology and the interactions between these and other metabolic tissues.