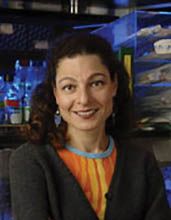 The general focus of our group is on the transcriptional and epigenomic control of inflammation, and especially on the molecular mechanisms of the anti-inflammatory actions of glucocorticoids (GC) – steroid compounds that remain the most commonly prescribed class of drugs for a majority of inflammatory and autoimmune diseases. Despite their clinical efficacy, GC are prone to causing serious side effects, especially on the bone and metabolism. The design of more specific ‘new generation’ GC-like medications requires a better understanding of how conventional GC function. We have been studying the transcriptional cofactors of the GC receptor (GR) and, more broadly, inflammation-relevant transcription regulators that control gene expression programs in macrophages – a central cell type to mediate protective as well as pathogenic inflammatory pathways. We rely on molecular biology, biochemistry and genomics to understand the transcriptional and chromatin networks that govern macrophage identity and gene expression, we engineer mouse strains lacking key components of suspect pathways and evaluate these mice in animal models of disease. By doing so, we have been able to identify novel critical players that regulate inflammation in vitro and in vivo that can be tested in future translational studies that will help understand mechanisms of disease pathogenesis in humans and ultimately improve patient care.

Historically, the recruitment of RNA Polymerase II (Pol II) to target promoters was considered the rate-limiting step for gene activation, yet in recent years, a different view has emerged. Many signal-induced genes are occupied by transcriptionally engaged Pol II even prior to stimulation, however, no full-length transcript is produced. Instead, Pol II initiates transcription but pauses at the promoter-proximal region bound by the Negative Elongation Factor (NELF) complex until signal-dependent phosphorylation by positive transcription elongation factor (PTEFb: cyclin T1/CDK9) dismisses NELF from the promoter and enables productive Pol II elongation. We discovered that this pause-release checkpoint serves as a rate-limiting step for activation of the majority of genes encoding mediators of inflammation in macrophages (Adelman et al, Proc Natl Acad Sci USA 2009; Gupte et al, Proc Natl Acad Sci USA 2013; Sacta et al, eLife 2018). Several projects in the lab focus on how interfering with Pol II pausing affects inflammation control. We use mouse strains conditionally lacking NELF or apply inhibitors of pausing complex assembly in murine models of autoimmune arthritis to test potential therapeutic applications of our findings.

3. GR and GRIP1 in macrophage polarization and metabolic homeostasis

Macrophages are a cell type of great plasticity encompassing distinct populations that differ in their developmental origin and perform distinct, even opposing functions. Importantly, a disrupted balance of these populations leads to numerous human pathologies including metabolic syndrome and type II diabetes, cardiovascular disease and even cancer. For example, in obese adipose tissue, activated inflammatory macrophages (aka ‘M1’) promote chronic inflammation aggravating insulin resistance, whereas homeostatic tissue-repair (M2) macrophages that normally reside in ‘lean’ adipose tissue are anti-inflammatory and antagonize metabolic dysfunction. GCs are well known for their diabetogenic systemic side effects, however, in macrophages, they both suppress inflammatory gene expression in M1 and promote the polarization of M2. Interestingly, GRIP1 cofactor participates in both processes, not only by facilitating actions of GR but unexpectedly, by serving as a coregulator for KLF4 (Coppo et al, Nature Communications 2016) – a master-regulator of M2 polarization. Consistently, mice lacking GRIP1 in macrophages are sensitized to obesity-induced metabolic inflammation and insulin resistance. Moreover, adipose tissue-derived macrophages from these mice display a general transcriptomic shift toward the inflammatory M1-like phenotype. We are investigating the genomic and molecular basis of homeostatic macrophage polarization in response to different cytokine and hormonal stimuli and the role of GRIP1 in mediating their functional convergence.

4. Regulation of GRIP1 by phosphorylation

GRIP1 is a multi-functional coregulator that can elicit opposite transcriptional responses (activation vs. repression) or engage in complexes with physiological varied or even antagonistic functions, such as immunosuppression in conjunction with GR, M2 macrophage polarization by cooperating with KLF4 or innate immune response when bound by IRFs. What enables this regulatory diversity is unknown. We discovered that in response to GCs, GRIP1 is phosphorylated on multiple sites and by multiple kinases in a GR interaction-dependent manner and that distinct GRIP1 phospho-isoforms are recruited to individual GR genomic binding sites (Dobrovolna et al, Mol Cell Biol 2011; Rollins et al, Nature Communications 2017). Moreover, GRIP1 phosphorylation facilitated GR-mediated gene activation at palindromic GREs but not repression at the tethering sites suggesting that phosphorylation can serve as a code to drive both selective recruitment and function of GRIP1. We envision that other posttranslational modifications may occur in response to signals that activate non-GR GRIP1 partners (e.g., IRFs or KLF4) as a potential mechanism to selectively direct GRIP1 to different pathways.

5. The role of GRIP1 in neuroinflammation

Macrophages and microglia are critical in the pathogenesis of multiple sclerosis (MS) – an autoimmune demyelinating disease of the central nervous system (CNS) and its mouse model, experimental autoimmune encephalomyelitis (EAE). GCs and interferon (IFN)β are front-line treatments for MS, and disrupting each pathway in mice aggravates EAE. Because GRIP1 facilitates both GR and type I IFN transcriptional actions, we anticipated the loss of GRIP1 to aggravate disease. Surprisingly, myeloid cell-specific GRIP1 deletion dramatically reduced EAE severity, yet, also blunted the therapeutic properties of IFNβ. We are using genetic and transcriptomic approaches to understand the molecular basis for the unexpected permissive GRIP1 function in microglia and/or CNS-infiltrating macrophages during neuroinflammation.