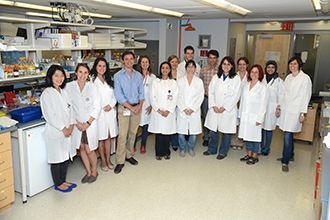 The main focus of the research in my laboratory is on the regulation of mitochondrial metabolism in diseases associated with mitochondrial dysfunction. We are studying the role of mitochondria in the pathogenesis of neurodegenerative disorders with special emphasis on amyotrophic lateral sclerosis (ALS, Lou Gehrig#146;s disease) and on diseases caused by mutations of the mitochondrial DNA (mtDNA). MtDNA point mutations and rearrangements have been associated with a heterogeneous group of sporadic, mendelian, or maternally-inherited mitochondrial encephalomyopathies. These mutations generally cause an impairment of the respiratory chain, with a reduction in ATP synthesis. However, very little is known about how affected cells cope with impaired energy metabolism. For example, which ATP-dependent cellular functions are preserved and which are down regulated or abolished. It is also unclear which downstream effects mtDNA mutations have on the regulation of mitochondrial biogenesis and on the modulation of mitochondrial functions. We are investigating these complex aspects of mitochondrial biology in health and disease using cybrid cell models, where we are able to transfer various pathogenic mutant mtDNAs from human patients into cells lacking mtDNA but containing a normal nucleus (rho0 cells). We are focusing our studies on post-translational modifications of mitochondrial proteins, such as phosphorylation and oxidation, which are likely to play an important role in modulating the effects of mtDNA mutations. We are also studying the regulation of apoptosis, in mtDNA mutant cells. A growing body of evidence suggests that mitochondrial dysfunction plays a role in the pathogenesis of various neurodegenerative disorders, including ALS. We have demonstrated that familial forms of ALS resulting from mutations in Cu,Zn, superoxide dismutase (SOD1) are characterized by mitochondrial dysfunction. Mutant SOD1 acquires a #147;dominant toxic gain of function#148;, but the mechanisms whereby it causes motor neuron cell death are still unclear. We have shown that SOD1 localizes in mitochondria, where it forms pathogenic aggregates. We are studying the mechanisms underlying the mitochondrial import of mutant SOD1 and its toxic functions. We use both cellular and animal models to investigate mitochondrial dysfunction and its pathogenic mechanisms. Mouse models expressing mutant SOD1 targeted to the mitochondria are being generated to study the specific role of mitochondrial SOD1 in the pathogenesis of familial ALS