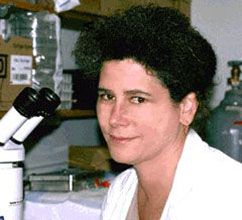 Regulation of the volume and composition of the body fluids of multicellular organisms is mediated by the diverse transporting epithelia of the kidney. Each human kidney contains approximately one million identical functional units called nephrons, which join up to the renal collecting system establishing continuity with the ureters and urinary bladder. A nephron contains seven distinct segments each of which has one or more unique epithelial cell types. Hence, during embryogenesis at least 14 different renal cell types must be generated. In addition, each cell type must be positioned correctly in the nephron.

The metanephric blastema is the embryonic primordium from which diverse nephron cell types are derived. Cells of this primordium must receive an inductive stimulus to generate mature renal cell types. Utilizing molecular biological techniques to directly tag single cells of this primordium, I have shown that it contains single cells that give rise to diverse daughters. Prior to induction, embryonic renal cells have not yet made the decision to become a unique mature cell type. Further lineage analysis experiments demonstrate that after induction developing renal cells assume a single mature fate.

These findings make renal differentiation an exciting model system to address one of the major questions of cell and molecular biology today: What mechanisms guide embryonic cells to develop into a unique mature cell type? The advantage of the renal system in addressing this question is that multipotent embryonic renal cells acquire unique mature fates during a defined period of time which can be studied in cell and organ culture model systems. Research in our lab is focused on two interrelated questions concerning the generation of diverse renal cell types during embryogenesis. These questions are being answered with the tools of cell biology, immunocytochemistry, biochemistry and molecular biology.

The first question asks what is the inductive signal that triggers multipotent nephrogenic progenitors to differentiate. We have demonstrated that a single gene product, wnt, can trigger embryonic renal cell differentiation. Interestingly, this gene is the homologue of a Drosophila gene, wingless, that mediates body organization during fly development. Studies are in progress to define the mechanism by which wnt induces renal cell differentiation and diversification.