The main focus of Dahia lab is to understand the role of major cell signaling pathways, particularly Shh, Wnt, BMP and TGFβ in postnatal development, differentiation, aging and degeneration of the intervertebral disc (IVD), and translate this to develop approaches for regeneration of the IVD and to treat lower back and disc related disorders. 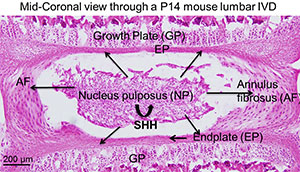 IVDs are cartilagenous tissue present between each vertebra and its growth plates (GP). Each IVD consists of a central semi-liquid nucleus pulposus (NP), surrounded by a multi-layered annulus fibrosus (AF), and connected to the bodies of the adjacent vertebral bodies by cartilagenous end plates (EP). Together, these components form a strong joint that resists both tension and compression forces between vertebrae. Degenerative disc disease (DDD) is a major cause of lower back pain, and other neurological symptoms leading to a decreased quality of life. DDD is extremely common, affecting as many as one in seven people. However, how is it triggered is not known. The treatment costs are high, and often include surgical intervention. However, treatment is essentially palliative, since it treats the effects of disc degeneration rather than the causes.

Research in Dahia lab aims to identify the molecular mechanisms of postnatal growth, differentiation and aging of the IVD using mouse model system, and how these mechanisms are down-regulated, leading to age-related changes in the IVD. We have developed the mouse lumbar IVD as a model, and successfully shown that it can be used to identify the signaling pathways in the IVD that control postnatal growth and differentiation. We have found that during postnatal growth, the NP acts as a signaling center that controls both growth and differentiation of the postnatal IVD. NP cells express SHH, and blockade of Shh signaling both in vitro and in vivo shows that it is essential for cell proliferation and differentiation of the IVD. NP cells also express several WNT ligands, which are required to maintain Shh signaling in the IVD. Both these signaling pathways, and their downstream targets are down-regulated by the end of the growth period. Our studies show that Shh signaling, and the expression of differentiation markers, can be re-activated after the growth period by activation of canonical Wnt signaling. This suggests the potential of Shh and Wnt signaling pathways in regeneration of IVD.

The long-term goal is to identify potential biological approaches to therapy, using the same pathways that control IVD growth and differentiation during the early postnatal stages.