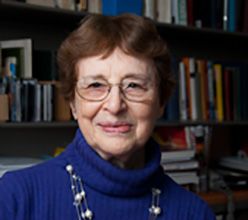 Dr. Bernice Grafstein received her B.A. in physiology at the University of Toronto and her Ph.D. in neurophysiology at McGill University in Montreal. As a graduate student she trained as an electrophysiologist, working on structure-function correlations in the cerebral cortex. Her thesis work was on the mechanism of cortical spreading depression, which appears as a wave of decreased electrical activity advancing slowly over the grey matter. This phenomenon has been recognized as playing an important role in migraine, stroke and other cortical pathology. Her contributions established the role of the extracellular movement of potassium ions in propagation of spreading depression, and her work has become a classic in its field, acknowledged even today. She subsequently became interested in nervous system development and regeneration, and is known for her work on intracellular transport of protein in normal and regenerating neurons, as well as other forms of molecular signaling among various cell types in the brain. She has been President of the Society for Neuroscience and is currently a Trustee and Vice-President of the Grass Foundation, which supports training and research in neuroscience. She is Co-Director of the Brain and Mind course for second-year medical students and teaches in a number of other Medical College and Graduate School courses.