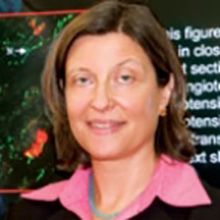 There are three areas of research in the lab all of which focus on receptor mediated regulation of plasma membrane transporters. They are briefly described below.

The overall objective of this project is to elucidate the renal mechanisms in the intercalated cells of the cortical collecting duct involved in the adaptation to hypovolemia as may occur in such conditions as diarrhea, diuretic use, and congestive heart failure. K+-sparing is an important homeostatic component in response to hypovolemia but the means by which K+ is conserved when NaCl is reabsorbed in the cortical collecting duct is not understood. We are testing the hypothesis that the intercalated cells of the cortical collecting duct are responsible for K+ reabsorption and is effected by two H+-K+-ATPase enzymes localized to the luminal side of the intercalated cells. The mechanism by which Cl- reabsorption accompanies Na+ reabsorption from lumen to blood is also being examined by investigating the role of an apical Cl-/HCO-3 exchanger found in the base secreting intercalated cell sub-type. It is predicted that the net effect of these processes is to ensure that K+ sparing, and acid-base homeostasis accompanies NaCl reabsorption. Furthermore, it is believed that angiotensin is the hormone responsible for mediating the chronic effects of volume depletion on H+-K+-ATPase activity and apical Cl-/HCO3- exchanger activity via AT1A receptor activation. The overall premise for conducting these experiments is that if we understand the physiological basis by which the body normally conserves K+ then we will also have identified a target that potentially can be exploited for therapy of disorders of K+ metabolism.

The purpose of this study is to determine how activation of the histamine H3-receptor in cardiac sympathetic nerve endings modulates release of norepinephrine. We have recently discovered that activation of the histamine H3-receptor, in cardiac sympathetic neurons, can modulate intracellular Na+ and Ca++ ion activities both of which can regulate neurotransmitter release, via carrier-mediated release of norepinephrine or Ca++-dependent exocytotic release. These findings demonstrate that activation of the H3-receptor in cardiac sympathetic nerve endings diminishes excessive release of neurotransmitter as occurs with ischemia, by inhibiting the actions of two distinct norepinephrine releasing mechanisms and may serve a cardioprotective role. We are presently studying the signaling pathways induced by H3-receptor activation, which are responsible for inhibiting the Na+/H+ exchanger and the N-type Ca++ channels. This work clarifies new therapeutic approaches for the management of cardiac arrhythmias associated with myocardial ischemia.

The objective of this project is to investigate activation of a local renin-angiotensin- system in the heart during myocardial ischemia and to assess the role of angiotensin in modulating adrenergic neurotransmission. Our working model is that myocardial ischemia activates the formation of local angiotensin in the heart. We speculate that this locally produced angiotensin, acts in a paracrine mode, and stimulates AT1 receptors on the cardiac sympathetic nerves, leading to excessive release of norepinephrine during ischemia. Our recent findings demonstrate that angiotensin is capable of stimulating the Na+/H+ exchanger in the cardiac sympathetic nerve endings and may play a pivotal role in promoting excessive release of norepinephrine as seen with myocardial ischemia. This pathological “carrier mediated” release of norepinephrine can lead to lethal arrhythmias associated with the ischemia. This investigation may uncover a new approach in the treatment and/or prevention of ischemic arrhythmias associated with "carrier mediated" norepinephrine release.