Finding Artistic Inspiration from Cells in a Culture Dish

As scientists, we often find beauty in experimental images, whether it be a micrograph of cells in a dish or a scan of the human brain, but few of us have the artistic talent to turn these images into works of art. Tanya Jain, a 3rd year student in the Neuroscience program, did just that! Her artistic rendering of astrocytes derived from pluripotent stem cells landed the cover of the August 5th edition of Neuron.

Prior to joining WCGS, Tanya worked at New York Stem Cell Foundation as a research technician. During her tenure at the foundation, she discovered a new surface marker on human astrocytes derived from inducible pluripotent stem cells (iPSCs). She found the novel cell surface marker, CD49f, using a flow cytometry cell surface marker screen. In Neuron, she and her colleagues describe how CD49f can now be used to identify and sort human astrocytes, both from stem-cell derived brain organoids as well as human fetal tissue. Similar to rodent-derived astrocytes, these sorted human astrocytes become reactive in response to pro-inflammatory cytokines and no longer support neurons in culture. Thus, these sorted astrocytes recapitulate in vivo functions and are a useful tool to study neurodegenerative diseases.

The illustration is a digitally modified rendering of a trace from a fluorescent image of astrocytes stained with GFAP, a canonical astrocyte marker. Tanya was overwhelmed by the beauty of the fluorescent and told us that the computer screen lit up with these beautiful cells that looked like stars in the night sky! Not only did this image land her the cover of Neuron, but it influenced her future scientific interests. It is one of the reasons she applied to neuroscience programs instead of a broader biomedical program for her graduate studies. Luckily for the field, Tanya finds the brain endlessly fascinating and also breathtakingly beautiful! In the future she hopes that the field will begin to view astrocytes as important as the more famous cell type found in the brain, the neuron. 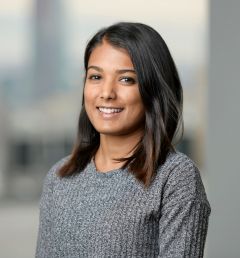